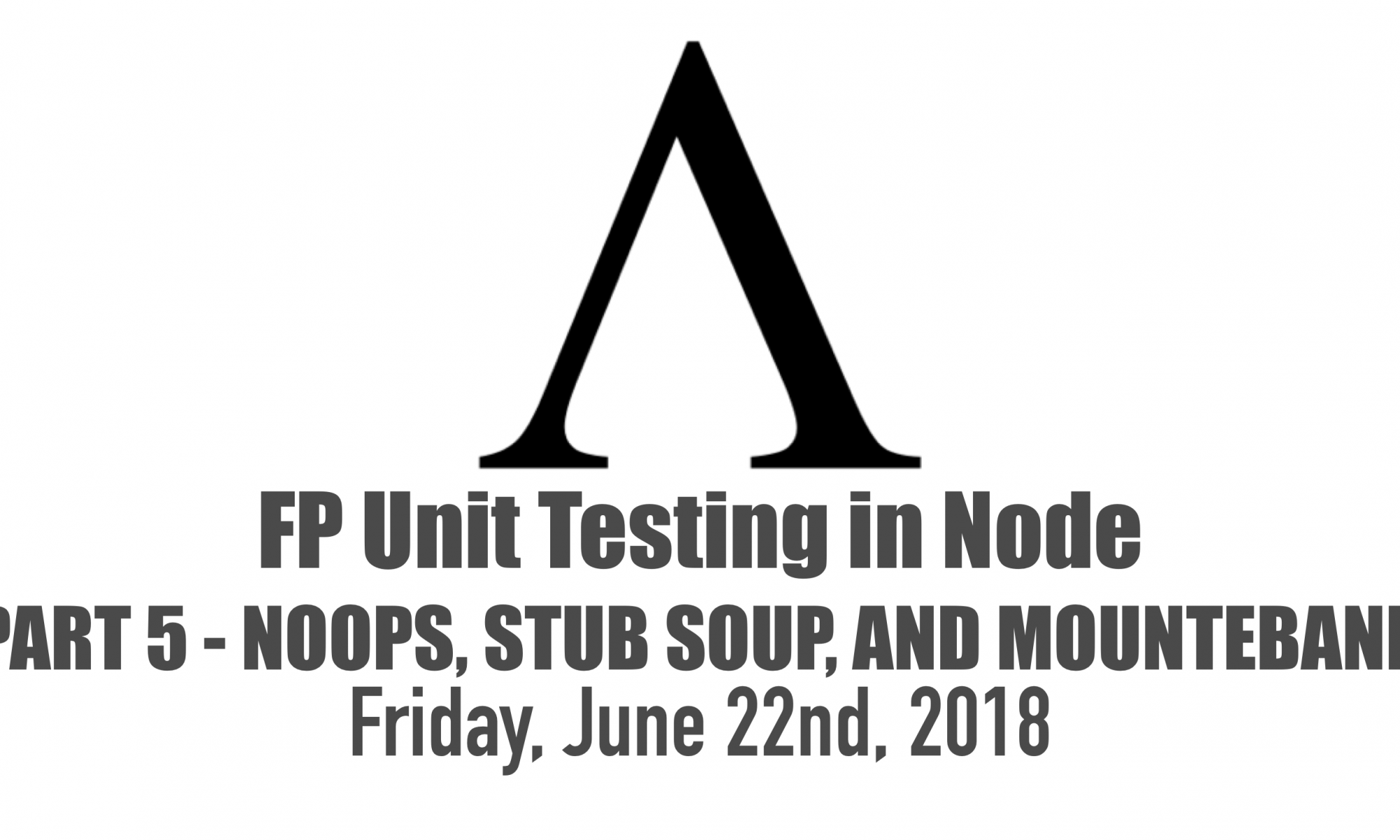 Welcome to Part 5 where we cover more about noops with a utility to test them, the “stub soup” that can happen if you don’t create small pure functions, and how we can utilize stubs instead of mocks to unit test larger functions. The most important part, though, is setting up Mountebank to show how integration tests can show problems in your unit tests despite 100% coverage. We use wrapping class instances as an example to show you the pitfalls Object Oriented Programming code can make for you.

This is a 6 part series on refactoring imperative code in Node to a functional programming style with unit tests. You are currently on Part 5.

At this point, we’ve shrunk our Express route as much as we’re going to without some serious refactoring. Let’s unit test it using (read copy pasta) all the stubs we’ve already made.

Before we proceed, let’s explain what a noop is. Pronounced “no awp”, it’s slang for “no operation”. It means a function that doesn’t return a value so it apparently has no effect because we have no proof it did any operation. That isn’t true; we all live and die by console.log which always returns undefined. If you run in ECS, all those console.log calls are putting text in standard out and you’re probably collecting all those logs for into ELK or CloudWatch or Splunk. That’s certainly an “operation with noticeable effect”. Functional Programmers call that a “side effect” of the function.

Often you’ll stub them in unit tests like () => undefined or the less clear, but shorter () => {}. Save yourself some typeing and use Lodash’ noop, Ramda always if you’re a Ramda purist or noop in Ramda Adjunct.

My God, It’s Full Of Stubs

Here’s the unit test with stubs needed above it for sendEmail t3h lelz:

A successful test, but the stubs, while succinct, almost outnumber the lines of code for the test. As you can see, Functional Programming, even when attempted with best effort, doesn’t necessarily “solve” your unit tests having to create a lot of “test code”. Mocks often get a bad rap for being verbose and hard to maintain. Stubs I believe are included in this, but at least with stubs they’re smaller, easier, and “mostly pure”. Still, as soon as you refactor your implementation, you’ll have to fix your tests, and sometimes your stubs will have to change too.

Trust me, this is much more preferable than to refactoring mocks.

The best thing to do is remember your training of the basics, like DRY: don’t repeat yourself, and keep your tests organized with commonly used good and bad stubs within reach (meaning you don’t have to scroll too far to read them). Like OOP, FP functions should be short and focused to be re-usable, and most importantly, composeable. It’s hard and gets easier with practice. A fully fleshed out idea of the problem you’re trying to solve helps a lot, don’t be afraid to prototype in imperative code.

Let’s add the failing which is easy because basically any stub could fail and the whole function fails:

And the most important, what sendEmail eventually resolves to. Yes, returning a Promise every time is important, but let’s ensure it resolves to something:

And coverage is now:

Class Composition is Hard, Get You Some Integration Tests

Sadly, this is where Functional Programming and Object Oriented Programming stop working together. Our code has a bug that you won’t find in unit tests, only integration tests. In languages like JavaScript, Python, and Lua, when you call functions on Classes without the class attached, they’ll often lose scope (this or self will be undefined/nil). Eric Elliot breaks down the details of a lot of these cases in his article Why Composition is Harder With Classes.

Integration tests using Supertest or Mountebank help with different levels of integration tests. We’ll use Mountebank in this article. Suffice to say your unit tests are only as good as the stubs you provide. The stubs you provide basically fake or emulate functionality of the dependencies and are as small and simple as possible. Stubs are different code than the concrete (real) implementations, and unless they capture it exactly, don’t always test the same. You’ll see an example of this below testing OOP code.

Notice none of our stubs use any classes or Object.prototype, and yet, this is exactly how nodemailer works. It all comes down to class instances losing their this scope. Let’s write a basic pure wrapper around nodemailer, unit test it, show it pass, then setup Mountebank so we can show it breaks at runtime when you use the real nodemailer vs. stubs. Given Mountebank is a large topic, I won’t cover too much how it works, but the code is included. Just know it’ll listen on the email port, act like an email server, and send real email responses so nodemailer believes it truly is sending an email.

Let’s create a sandbox.js file to play and a sandbox.test.js in the tests folder.

And the unit test:

So it passes. Let’s try with the integration test that uses a real nodemailer instance vs. our unit test stubs. I’ve setup mountebank to listen on port 2626 at localhost for emails. If someone sends an email with the from address equaling “jesterxl@jessewarden.com”, it’ll respond with an “ok the email was sent, my man”. Before we automate this, let’s do it manually first.

Run npm i mountebank --save-dev first, then once it is complete, open your package.json and add this script:

Now when you run npm run mb, it’ll run Mountebank. It’ll basically start a Node server on port 2525. As long as it’s running, you can send it JSON to add imposters (mocks for running services).

Setting Up Your Imposters

An imposter is basically a mock or stub for services. Typically mocks and stubs are used for unit tests and are created in code. In Mountebank, however, you create one by sending Mountebank REST calls. For example a POST call, typically on localhost:2525. You send it JSON describing what port it’s supposed to listen on, what other things to look for, and what JSON & headers to respond with. Mountebank will then spawn a service on that port listening for incoming connections. If the request has attributes it recognizes (you do a GET on port 9001 with a path of /api/health, you send an email on port 2626 from ‘cow@moo.com’, etc), it’ll respond with whatever stub you tell it too. For example, some hardcoded JSON with an HTTP 200 status code. While stubs typically respond immediately or with Promises, these respond as a REST response.

Check out the import top part of our setupMountebank.js that I’ve placed in the “test-integration” folder:

As you can see, a simple POST request to tell Mountebank, “Yo, if any dude sends an email on port 2626 and it is from me, respond it worked”. Typically Mountebank wants to define that response in the stubs Array, but for emails, you can leave it blank and it’ll default to a success response. At the time of this writing, there is no way to make an email fail, only REST calls. As long as Mountebank is running, it’ll remember to do this unless you delete it, or close Mountebank.

Now, to play around, I’ve run it manually to register. Check the bottom code:

Open a new terminal, and run node test-integration/setupMountebank.js, and you should see the Mountebank terminal light up:

That “Open for business…” line is key; that means Mountebank understood what you want and worked and you can now send emails to port 2626. Let’s do that.

Open up sandbox.js and check the code that’ll run if we use Node to run it:

Swing and a Miss

Rad, now try to send an email via node src/sandbox.js:

Whoa, wat? Let’s go into Nodemailer’s sourcecode and see what the heck is going on:

It’s doing a type check to see if this.getSocket is a function vs. a Boolean. That’s fine, but they should of check for this being undefined first.

Or should they? Once you’re in class world, and you’ve been doing OOP for awhile, you shouldn’t have to check for this; it’s just a normal part of how classes work. If it doesn’t, something more fundamental is messed up, the most common being forgetting to setup bind in the constructor for callbacks for example.

We’re not going to fix Nodemailer to make it more friendly to FP developers. In fact, this is a common trend in that many libraries you use both in Node and in the Browser (i.e. from node_modules) will be written in all sorts of ways. You need to be accommodating.

Instead, we’ll assume that we’re not allowed to call sendEmail alone, and ensure it’s always something.sendEmail; whatever to the left is the instance, and will retain scope if you call it like that. This is why a lot of my examples you’ll see I’ll make fs the dependency and then call fs.readFile vs. just readFile.

Let’s first fix our implementation to be OOP friendly, and ensure the tests still work, else fix ’em. The old code:

I was like Whee!!! Let’s fix our original implementation now that we’ve proven we know how to wrangle OOP with FP now. We’ll change:

To the new OOP-friendly version:

This breaks 1 of the tests because the stub used to be a function; now it needs to be an Object with a function. However… we should be a little more honest and use a true class in the unit tests to be 100% sure. We’ll take the old 2 tests:

And change ’em to:

Notice once you go OOP, things get more verbose. Bleh.