Dude, she’s dead, get over it. Tifa for the win!

Via her majesty & Something Awful (not always safe for work). 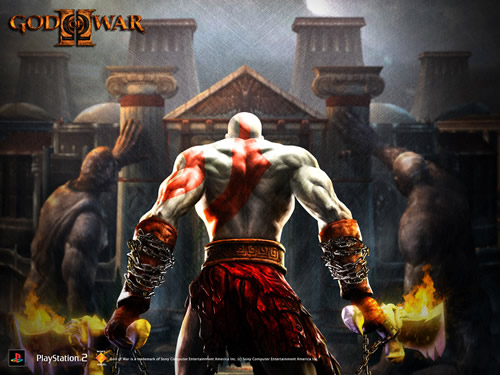 God of War 2: More bad arse than the first one. Not for kids. Money well spent. I got the PS2 version. 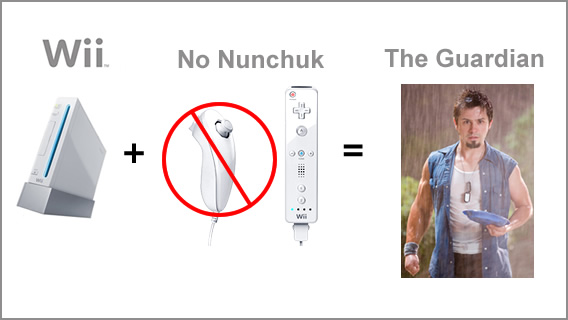 Dale and I played some mad tennis on the Wii. The next morning, both of us had a majorly sore right arm. I realized if I did that for 3 months I’d become Reggie from Lady in the Water. ‘Course, if you’re planning on hunting scrunts, there is no better training! Definitely plan on getting one for my birthday since I am really disappointed in the game selection for my XBox 360.

I rented Oblivion from the local video store at the behest of Jeff that I play it. It is a really fun game. It’s basically a role-playing game combined with a first-person shooter. It does have a 3rd person view as well. You can choose from a few different races, and your class & speciality skills after a first short adventure to get you acclimated. I chose a Wood Elf and created a custom class called “Swashbuckler”, although, I’m finding I much prefer the bow to the sword.

While the game has an overarching goal, it’s extremely free form, staying true to the Elder Scroll roots. You can travel just about anywhere, take random quests, and explore locales at your own pace. While the pressure to complete an objective is what makes games fun and involving, Elder Scrolls mini-quests have that too. The graphics are pretty good on theXBox 360. I had to lower the brightness 1 notch to make the game realistic. Even so, if I don’t use a torch, I sometimes miss loot laying around. It’s interesting that the game actually supports pupil adjustment with lighting. Meaning, if you are in a dark cave with ambient lighting, you can see a short distance down the cave. If you suddenly light a torch, while you can see your immediate environs very clearly, but the distance at which you can see is greatly reduced as the light of your torch only extends so far and your pupils shrink, thus not allowing in enough light to see the darker environs. Combine that with your REAL eyes adjusting to the TV screen, and you get quite a unique experience while crawling around dungeons. I’ve been very tempted to light a torch, only to remember the last time I did, I blinded myself, and walked right into a goblin berserker. Very neat feature. I play a sneaking scout, but I’m sure a wizard might have it rough with all the flashy spells.

I haven’t read the instruction booklet, so I may be missing some things, but I’m extremely critical of the games sneaking portion which just so happens to be my specialty in game. Games like Thief had this down to a science. You had a gem in the middle of the screen, and it’s glow represented how visible you were including the noise of your footsteps. There were varying levels of how hidden you were, and you could utilize shadowy areas to your advantage as well as objects to hide behind. Not so in Oblivion; it seems that the algorithm they used is extremely generic. You are basically hidden or not. The amount of stress, and thus the awesome rush you’d get in Thief or Splinter Cell is just not there in this game. If you decide to play a rogue like character, keep this in mind. Additionally, hiding behind objects doesn’t really appear to do anything. A minor consolation is that you CAN become hidden later on, even in the midst of a battle. In games like Thief and Might & Magic: Dark Messiah, if you were spotted, the jig was up and you did the classic fight or flight scenario. This game, however, is a lot like Splinter Cell in that if you move slowly and stay hidden in dark areas, enemies can lose track of you. For a hide in shadows guy like myself, this is great because I get a bonus to damage, even with my bow.

There are a lot of realistic elements in the game like degrading quality of goods that you have to repair yourself or pay someone to do so, wandering around harvesting plants and stuff to make potions, the classic (the best feature of earlier Elder Scrolls) dress up. There are a bunch of outfits you can buy with bling to make your character look pimpin’. I’m not sure if this affects your Speechcraft skill, but regardless, neat feature.

There are some silly things, like a high level Acrobat skill value can allow you to jump off the surface of the water. I think this is pushing suspension of disbelief too far, and they should keep that in the realm of magic. Additionally, you can dodge with a bow if you equip it, block with it, and then jump. Since keeping a heavy shield on hand for a bower kind of sucks, my guess is they did this to give archers a fighting chance in confined dungeons. Easier to do with an XBox controller than on a PC, I’ll give them that.

The last cool thing is that this game takes great advantage of the XBox Live Marketplace. There are some extra levels you can purchase (some were free for Christmas). In particular, I bought horse armor for $2.50 (200 points) and I don’t even own the game! Her majesty and I were looking at what you could buy, and the light elven armor looked awesome on the horse. Since horses are expensive (1000 gold) your first set of armor is free and helps protect your horse. Additional armor is 500 gold thenceforth from the stable near the main Imperial town. While the horses eyes do look spooky, it’s a pretty neat addition, the fact you buy whole games and accessories via the marketplace.

I used to be a big critic of Valve’s Steam which is their endeavor to get a gaming platform, complete with their Source engine, to allow developers to build games, deploy them, and get paid without the insane publishing / delivery costs typical in boxed packages you’d get at Best Buy for example. This really frustrated me because Steam felt extremely low quality, even today years after it’s initial inception and I would prefer Valve spend their time on creating games vs. platforms. However, after purchasing Half-Life 2: Episode 1, and then Might & Magic: Dark Messiah based on the recomendation of Johnathan Miranda… I can see where they are going and have enjoyed both purchases immensely. Therefore, I think XBox Live really has something special here. I think they overcharge like crazy, though, and their naming scheme based on your name being synonymous with your account is a flawed system. ICQ’s best feature was they gave you a unique number. You could then use whatever name you wanted. XBox Live actually charges you to change your name, as well as changing your picture, and a variety of other personalization’s which I think will hurt them in the long run. Regardless, overall, it’s really cool to be able to choose things I want to purchase for an existing game; really really cool!