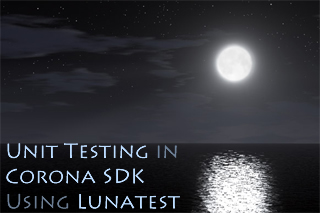 In this article I ‘ll give you an overview of why you’d want to unit test your Lua code in Corona SDK, what features Lunatest has, a walk you through some real-world unit tests and suites I’ve written. I’ve forked Lunatest on Github to make it work with Corona SDK. This blog post has a companion video embedded below.

Lua in Corona SDK has 3 issues when your game/application code base grows to any large size.

First, Lua is a dynamic language much like JavaScript, Ruby, and Python. As such, you have little to no help from the compiler to ensure your code expects even basic parameters being passed to your functions as well as misspellings.

Secondly, Lua is dynamic at runtime. You actually need to run the code to see how it actually works. Examples include combining strings together to dynamically access properties on dynamically created objects in anÂ asynchronousÂ way.

Third, even if encapsulated, you have no way of knowing if your new code breaks existing code, or if modifying existing code allows it to work the same way with some assurance. This problem is not unique to Lua, it’s unique to any complex code base regardless of language.

All 3 combined necessitate a need for unit tests. Some would argue even just 1 of the above.

Unit testing, as far as we’re concerned with Lua, are a bunch of functions that make sure things work as expected. Inside of those functions, you write those expectations about how you expect things to work as a bunch of assert functions.Â These groups of functions aren’t actually part of your main code base; they’re grouped together in a test folder and called a test suite. The more of them you have, the more test coverage you have.

The above 2 paragraphs can, and do fill books with the details of TDD & unit testing… but that’s all you need to know for now. Heck, you can ignore everything I write here, start to proactively use assert, and your coding life will improve a lot.

Asserts
Let’s start at the beginning. Lua already has an expectation function, called “assert”. It looks like this:

This code asserts or “states positively” that the variable is true. If it were false, an error would be thrown with that string “Someone forgot to drop the bass.” passed into the error function. If you’re not aware, the error function in Lua stops execution of the current script and prints whatever string it has to the console/terminal. Secondly, all functions in Lua are implied to be successful if they return true.

Even without unit testing, using assert, you can be proactive in finding errors. For example, I use it all the time in manual getter/setters in Lua (not metatable ones, the set/get + method name convention). Since Lua has no typing system, I ensure my inputs are sanitized like so:

Those 2 functions alone find ALL kinds of silly bugs where someone, somewhere accidentally set a value to nil and it made it’s way deep into the bowels of some class, and I’m wondering who’s fault it is. When everyone starts doing this, it makes it really easy to find who caused the bug, and quickly.

Yes, there is a performance cost to assert. However, it’s easier to remove a bunch of assert functions scattered everywhere via a Find / Replace from solid code then it is at add them to code that runs very fast with lots of unknown bugs.

Just about every testing framework expands upon the above function. In fact, 80% of what they offer in their libraries and frameworks are additional assert functions. Why? Three reasons. First, would you rather write this?

The second reason is it’s more clear what that is testing; the function name alone tells you what you need to know before you’ve even made it to the parameters.

Now this one may appear backwards; “A comma vs. using the normal mathematical construct!?”

Keep in mind, however, many bugs are caused by misplaced operators. For example, developers often will use = instead of == to assign a value, or they’ll use > vs. >= for edge cases, etc. In writing that code, it’s completely legal, and Lua’s interpreter won’t give you an error when you run it. Using assert_gt in this instance will ensure your expected value is there, as well as ensure you’ve use the operator correctly. If not, it’ll actually… you know… help you out!

And although I bash Lua for not having a type system, it does have a type function for a reason. You can test a variety of types such as assert_not_boolean for a return value that’s supposed to be a number, and assert_metatable if you’re doing funky metatable magic.

A suite is just a series of functions that are related. For example, in my example video I show my file suite which has unit tests for testing my DeleteFileService class and my ReadFileContentsService class. Since reading and writing and deleting files are something I consider related, I created a file suite, or “a bunch of functions that test file shiz”.

While lunatest can test functions inline, as an OOP guy, to me that’s just gross. I like the more organized suites where all the functions are in their own file. Lua calls it a file, I call it a Class, Lunatest calls it a suite… we’re all happy.

Here’s my file one:

2 things to note about this file. First, I use the much loathed module(…, package.seeall) at the top. This is what lunatest wants in how it loads modules so… you’ll need to do this too (yes, I temporarily hacked lunatest to support Corona’s packages, but it wasn’t worth it).

Second, notice the 2 functions are both global and start with “test_”. Any function you want Lunatest to run as a test, you need to prefix it with “test_” in the function name. Notice they aren’t prefixed with local, they’re simple global functions.

That’s it. Put a bunch of functions in that file, make an assert or two within them, save it, and then in your main file, tell luna test about it.

The above is good enough for writing suites that’ll help you. Here’s 4 more cool things suites can do.

If you have repetitive code that needs to be run before every test, you can run it in the test setup. This ensures you only have to run it once, you have the option of aborting the test, and it’s run in a protected manner (aka pcall). Additionally, you don’t have to call this yourself, nor remember to do so, Lunatest does this for you. In my StateMachineSuite, I have to instantiate the StateMachine class for every call so I put it in setup.

If you have code that needs to be cleaned up a lot or in a particular order, you can utilize the teardown. If you implement one, it’s called after every single test case. This also ensures that if everything is deleted, strange memory bugs are more easily found. Some classes require more than just nilling out their variables, in the case of Corona SDK Display Objects and Widgets which must have their removeSelf called, THEN you can nil out the variable reference. You can also ensure all of the benefits of setup, just in a function called teardown where you clean up your mess.

Finally, there is a suite_setup and a suite_teardown. Unlike setup and teardown, these are only called once for the entire suite; suite_setup before any tests are run, and suite_teardown after everything, including the last teardown, is called. Sometimes you don’t need unique setup code for your tests so you can put it here instead. This is also a good place for class imports.

Here’s my StateMachine example. Notice it has a suite_setup (but no suite_teardown). The setup instantiates the StateMachine and the teardown ensures it’s deleted so each test function gets a brand new SuiteMachine instance.

Pay attention to that last part, it has some good and bad practices. The whole point of unit tests is to test 1 thing or unit. You shouldn’t have 50 billion asserts like I do. Worse, you’ll notice some of the asserts at the bottom do not have custom error messages in the 3rd parameter. If any 1 of those fail, there is no way to tell which one failed. Bad, Jesse, BAD!

Setting up all of the above is a snap. Ready?

Next, add your suites:

That’s it! You’ll see the report of stuff in the console/terminal.

The problem with unit testing is that you need to have units to actually test. A lot of code that wasn’t written to be unit tested needs to be refactored first which can be a lot of work. If it’s also entangled with other code that’s also not easily testable… you see where this is going. That’s ok. You can start in one section, or test high level results. Yes, your setup code may be burdensome, but it’s something. Automated tests, even if a certain section, can help you a lot. Additionally, when writing new code, think about writing it in a way that’s testable, even if you never actually test it. This often results in less coupled code anyway.

Additionally, while testing is in fact creating more code, you find more bugs, early, and faster, proactively. For games that require quick iterations… this can be tricky. If the game needs to be built to verify it’s even fun, is it worth it to unit test? As you make a lot of games in the same tech (whether Lua, C#, ActionScript, Java, whatever…), you’ll start to gather are a large set of functions, libraries, and classes that are reusable from project to project. THOSE are worth unit testing.

Unit tests are just a bunch of functions that test expectations, and are organized in suites. You run a bunch of test suites inside of Lunatest. Unit tests help ensure your function types are correct since Lua has no helpful compiler to help on this front as well as spelling mistakes. It also verifies your code works as you expect at runtime. Finally, for larger code bases, you can add new code without worry of breaking old code, including if you modify old code. The more unit tests you write, the more coverage you have. The more coverage, the easier it is to manage a larger code base.

Remember, unit tests are code too. You can still follow all the best practices your used to such as OOP, DRY, and being clean. MOAR UNIT TESTS! 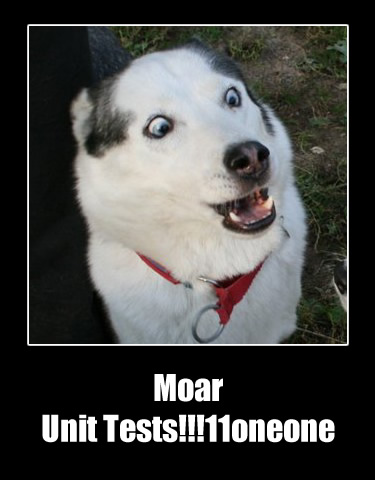