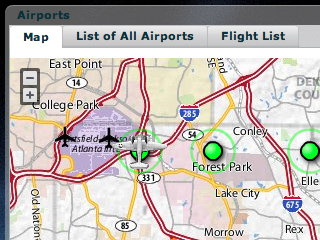 Yahoo released an AS3 version of their Map API. I got to play with it over the weekend. Ted’s got more details. The pro’s are its cheaper than ESRI’s bad ass component, wayyyyyy faster than the Flex 1.5 AS2 one (yes, you can write slow AS3 code), and “feels” very responsive. They also removed the default animations built-in which is nice. While they were a cool effect, they made the map feel slow and un-responsive, and I’m sure made the code really really challenging for the developers at Yahoo to debug.

The cons are the map tiles are still slow to load, I haven’t figured out how to create more than 1 instance, and I heard from Mario Klingemann that you can’t seem to able to snag bitmapData from it because of a missing crossdomain.xml.

Don’t really care, though. While I’ve had the pleasure of working with ESRI’s awesome component, this component will definitely do in projects in any other market. It’s free, fun, and easy to work with. Good job, Yahoo! After showing Josh Tynjala ESRI’s stuff at 360Flex in San Jose, and then hearing rumors that Yahoo wasn’t working on any map stuff (not from him, just around), I was pretty bummed. Not anymore!

Here is a sample application that loads flight data from FlightAware.com. I whipped this up in about 20 hours. It’s an updated version from a year ago. You can see airports on the map, and then see the plotted flight paths on the map. On the airports tab, click “Show Flights”, and then choose “Plot on Map”.