2 weeks ago, I went to Orlando, Florida for the Red Bull Build, a contest Red Bull held for college students. The winners had a design studio built for them for a 3 week stretch to build a game promoting Red Bull X Fighters, an international motorcross freestyle competition. Justin Everett-Church and I convened to offer, as he said, encouragement, advice, and to hang out.

The place was phat, dude. It reminded me of why I got into this industry in the first place. You walk in and are totally inspired. The motorcross themes skillfully placed to not overwhelm, combined with the art (a lot from Atlanta!), decorations, and pretty lights just radiated style. The Red Bull fridges appropriately placed were very convientant and always stocked with cold Red Bull. Naturally, I helped myself. The room was so full with computers (mainly for net rendering Max 3D stuff) that they had to get an additional AC unit connected through the door to the outside balcony. The hole they cut in the door for the AC unit’s hose they turned into an elephant’s trunk. Chopped up Red Bull cans made up a really nice parrot above the elephant. The AC’s water was emptied out daily and used to water the plants outside. The bedroom was cool, and the lounge really nice. I suddenly realize why HD TV’s are cool after playing XBox 360 on it. There were various Mac Mini’s spaced around with web cams on them so you could see various angles of the studio from the web site. The best, however, was the ActionScript wall paper with branded, Red Bull X Fighters gaming ActionScript.

I was extremely inspired. I wanted to work there forever. The Red Bull team did a fantastic job as well as offering their assistance, and continuing support.

It reminded me of the early days of me in the industry. Those types of places are WHY I got into this industry in the first place. Highly creative environments surrounded by varied disciplines all focused on 1 goal: to create extremely cool work! You’ve got 3D over there, audio over there, painting over here, a DB guy there, some coders here, a project manager over here… wow… what a team.

The ActionScript gent, Gabe, wasn’t there when I first arrived, so naturally I immediately set to get involved to see if I could help. Getting some of the animations into Flash was proving challenging in regards to filesize. A series of images wasn’t going to cut it because animation was about 2.5 megs, and even with just 8 animations, that was a huge initial downloads. Gabe’s idea was communicated to me by the team to use Flash 8 video. Max 8’s alpha’d Quicktime MOV’s weren’t having their alpha recognized by Flash 8, though. Bobby, the 3D guy, got his Rorshak laptop (screen was busted, looked like an ink blot) to import the Max animation into AfterEffects, and then export it out again. We then imported that MOV, and it worked perfect. Upon compiling the video with On2’s transparency, it looked perfect, and was only 28k! I’m sure at a higher rez, it probably would of been 200k, but anyway, Flash 8’s video transparency is the hotness!

So, that was fun. It’s been forever since I’ve dealt with multimedia stuff in Flash and other design tools. Good to be working with designers and animators again, even if briefly. It was hard NOT to make stuff in that studio; you just constantly felt the urge with the energy and decor.

Also, was really great to see Justin again. He’s from Yahoo!. He’s also sharp as a tack. We were constantly offering our opinions to Victor, one of our Red Bull hosts, about the project. I agreed with everything Justin said, and the one time I didn’t, he gave me more context as to why he said what he said, and I ended up being wrong. I love being around smart people like that!

Hurricane Alberto tried to mess with us, and it was really neat to see even an inkling of a hurricane. I know of people think they are horrible, but I truly respect nature, and here I am in the state that prevents mine from getting annihilated every summer witnessing a mere inkling Mother Nature’s fury.

All in all, it was really great meeting the Zombie Cow team. You could recognize passion in others and I felt like I saw it. It was great meeting Victor from Red Bull, and the others involved including the photographers and other press peeps. The studio made me really nostalgic, and a bit determined to one day create something like that for my team. It was great getting to talk all things Flash face to face with Justin. 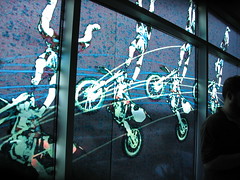