2006, the year of consulting. I hooked up with Universal Mind, a consulting firm and Adobe partner in February after 6 months of flirting. I did 3 main gigs, learned a lot from them, and felt like I’ve grown. Additionally, I’ve found more focus on where I want to take my career. I know what I want, and am working on finding out how to get there. I really want to get more into product development as opposed to service work.

If there is one thing this year taught me, it’s that Flash isn’t dead. I was under the false impression that I’d be able to do full time Flex development on larger scoped projects. Quite the contrary. My year has been full of both. This should hopefully strike a chord for Flash designers and developers in 2007; your skills are in high demand. Charge for it, and recognize you have valuable contributions to make in larger Flex development projects. Furthermore, I don’t see this changing for at least 2 years. A lot of the software development influx from enterprise companies as well as smaller firms do not have the multimedia and/or design talent for the type of Rich Internet Applications they wish to build. They will be looking for designers familiar with Flash & Flash Developers familiar with software development practices to help bridge the chasm, fill in the gaps, and warn of any pitfalls based on copious Flash Player knowledge. Some of the egotistical ones will think they can do this without designers and/or Flash devs, quickly realize they have talent gaps, and then reach the same conclusion. This will happen in the WPF/E community as well, so keep your eyes open for early adopter opportunities there as well.

If anyone tells you we are not in another internet bubble, they are full of shit. A lot of people have approached me, and colleagues of mine this year with start-up & product ideas that have no chance to make money. Most are either burning cash from VC’s that isn’t theirs, and they have no accountability for failure. Others just don’t know they have no chance to make money… but most are the former. The risks I guess to them are worth it for they are looking for the big payouts. Looking at history, it took about 2 years for the nastiness to hit the fan. I’d assume things would go quicker, and thus my predictions for 2007 are a lot harsher than most. How many of the following do you think can pay their bandwidth bills next year with revenue generated?

I’m a programmer, not a businessman. I specialize in writing code, not making money. Therefore, maybe I’m being to harsh, but frankly, I’ve seen this before; a lot of us have. We know how it ends. Either way, in the end, the consumer (contributor?) is winning so it’s all good.

My mouth has gotten me in trouble 3 times this year. 3 different people I look up to and respect have politely suggested I learn tact noting it’ll improve my public image and help my career. I feel I am most effective at being brutally honest since I see a lot of people not speaking up when they should. Uphill battle.

Another thing this year taught me is that I’m still wrong about 2002. Back then, I had said Flash Development would continue to be a seller’s market till mid-2004. By then, the talent pool would be saturated, and contractor rates would fall, as would the influx of work. That hasn’t happened, and doesn’t look like it’ll end at least until 2008. I read a few websites this year that said companies were keeping tight IT budgets. Not sure what companies those were because the amount of work this year was just like the last 3; crazy. The difference is, I’ve done next to nothing to promote myself or my services this year, and yet I’ve nearly tripled the amount of requests for work and talent this year compared to 2003 and 2004 as well as steadily increasing my rates. I DO however believe my CTO, Tom Link, that the Flex Market will do what the .NET one did, and get saturated. The reason I was wrong with Flash is that the barrier of entry to Flash Development never lowered. That’s why Macromedia made Flex in the first place. The ease at which entire engineering departments of companies, not just various individuals of programmers, have taken to Flex is scary as is the enthusiasm. While it’s great to see SWF finally become en masse a de facto standard for deploying applications to the web, it’ll make it harder to justify rates and certain processes as more and more people get into Flex development by the end of 2008.

Talent was still a big problem this year, and I see it getting worse next year as many of us continue to be stretched thin. The 2 worst contributors are designers and information architects next to qualified Flash Developers. A lot of designers currently either aren’t interested, or just don’t know, that they can contribute to Flex development and Flash Lite development. Flexdevs, at least right now, are programmers. Programmers don’t design. Furthermore, a lot of programming teams I’ve been on do not have design advocates. Meaning, they don’t care about design. Designers need to get someone on those teams (like me!) that are design advocates, and thus demand the correct processes be implemented between teams. On the Flash Lite front, Flash Lite 2 can take it’s time; there is still plenty of Flash Lite 1.1 work cropping up that is best suited from designers even with next to no scripting knowledge. Most have the same problem I do; we don’t know, nor care to know, about phones. Cell phones have reached a near alpha geek status. They are so different from the computer industry right now, that it really takes an early adopter mentality to get in the door. This is NOT a requirement, however. The club has no cover charge, it’s just down an alley on a hidden street. Employers don’t realize they can hire the same designers that tried to pass themselves off as Flash Developers 3 years ago for Flash Lite 1.1 work.

IA’s are the worst. Not only are they still debating about their titles & place in the world, but their discipline is grossly under-appreciated and misunderstood by the industry as a whole. Yet, they are the keystone to make most of these projects work, and they aren’t put on these projects. Information Architect, Interaction Designer, User Experience Head… whatever. There aren’t enough of you, and employers don’t see why in the nine hells they should pay for you. I know why, but I’m not a salesman. Frankly, it’s not my industry either; I’m just helping out because I know the ramifications if I don’t. Not sure impact in 2007, but I DO know I’m going to start putting my foot down next year on future projects more forcefully, demanding an IA in some form; it’s starting to get ridiculous. The cop-out small companies use is “the designer does both”. If you see the red flags, come crying to me, I’ll buy you a beer, and together we can pray it’ll be better in 2008… or start a bar fight.

I’ve seen a few big companies putting forth massive cash budgets towards Apollo endeavors. If you’ve read my blog at all this year, I’ve mentioned Apollo like once. I’m kind of over Flash on the desktop. Yes yes, I know it’s HTML,CSS, JavaScript, AJAX, and PDF too, but I don’t use those technologies, and most of my jobs have no need for what the desktop provides. Regardless, there are a ton of people who aren’t me, who do use those technologies, and who need those features. As such, designers & IA’s will have valid contributions here. If there is an Apollo project going on in your company in 2007, and your a designer that isn’t on it, raise hell. Same goes for Flex.

Next to my trip to Europe and something else to be left unmentioned till early 2007, one of the greatest experiences I had this year was getting to buy dinner for some of the main dudes who made my career in this industry. There were countless others including some other “main dudes” both from Macromedia / Adobe, as well as non-employees but if you were at MAX 2006, did YOU meet everyone there AND take them out to dinner? Didn’t think so. Shown here, I got to hang with Peter Hall of Flashcoder fame amongst other things, Nigel Pegg who wrote a lot of the early Flash MX & Flash MX 2004 components as well as one of the dudes who wrote Breeze with Peldi and a bunch of others, Steven Sacks who has helped keep me sane, and Chafic Kazoun of authority on Flash coding standards fame amongst other things. It’s pretty surreal; after you’ve met these dudes and become friends with ’em, you no longer fawn over them in person. You can still put them on pedestals, but you don’t act like it. You just talk as equals about cool shit, like code, business, and life… and take the piss out of ’em on occasion. Anyway, was an honor to buy dinner for these dudes, glad I got the opportunity. 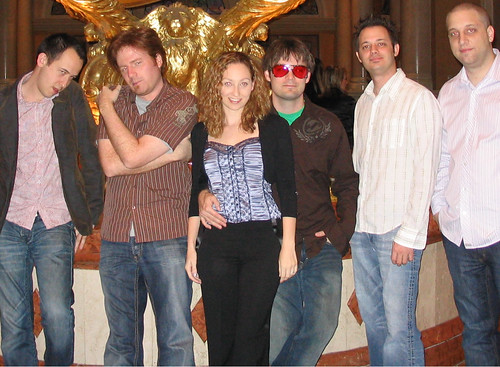 Beyond finding product work in 2007 (finding & doing are 2 different things, hehe!) and demanding more IA’s on projects, I have a bunch of things planned. Speaking at the 360Flex conference as well as WebDU in March. Furthermore, I’ve been doing a lot of Flex 2 & Flashcom in my spare time, so hope to share more code on that front as well as the logistical challenges involved in deploying a service based product. Finally, I plan to release my open source Flash Lite 2 component framework written in ActionScript 2 called “Shuriken” by the end of March.