Crank = Good flic. I have a feeling they removed a kung-fu scene from the beginning when he goes into a biker gang’s bar. Since Jason Statham‘s character was a lot more edgy, and less rico suave than his smooth roles in the Transporter 1 & 2, my guess is they wanted a clean seperation, so removed the scene in post. Don’t take your kids. I laughed a lot. There was some really progressive editing in there, like, sub-titles would stay, and he’d read them. Good stuff.

Check this crud out; I set my iPod on the window sill at my office in Detroit, and the earpiece fell on the power strip, turning off my computer. Thankfully I saved, but what are the odds!? 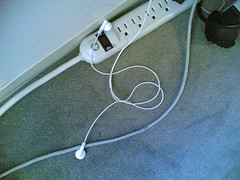 Finally, I’ve been travelling to and from Atlanta & Detroit for the past 4 weeks without incident. Suddenly, last Sunday (August 27th), my belt sets off the metal detector in Atlanta airpot. I’ve been wearing the same belt for a whole month without incident. I think we need another gun test just to exacerbate the idiocy of the facade. All the hype the US media spouts about airport security is bullshit. I’ve been flying every Friday & Sunday for the past 6 weeks, and security has been the same both before, during, and after the UK thang, the crazy woman thing, and the crazy dude thing. In all fairness, I’ve heard of delays; my mom 1 day after the UK thing, took 1 hour through security (usually 4 minutes for me), and her flight was delayed 4 hours. She abandoned the trip for that weekend.

It’s a good thing I drink too much caffeine, and thus my hyper-alert status can compensate for my mediorcre hand-to-hand skills if a situtation arises mid-flight. Terrorists and nut cases beware.